Billie Eilish returned to the Saturday Night Live stage on December 11 to serve as both host and musical guest, and she nailed both roles.

Billie, who was a musical guest on the show for the first time in 2019, began with a monologue on her look and unique style, with her new brunette hair color in full display. “Mrs. Claus going to the club,” she said of her outfit, which consisted of a flouncy, oversized white Christmas dress with red piping. She went on to say of her overall style, “Some people wonder why I started wearing baggy clothes. There was actually a good reason,” she clarified. “So it wasn’t just for comfort, or for style. This is hard to say for me, but the real reason I wore big oversized clothes back then is, I was actually two kids stacked on top of each other trying to sneak into an R-rated movie.”

Billie joked in her monologue that her childhood dream was to be in a movie, but that dream “died” after her mother wrote a script in which she cast herself and Billie’s brother Finneas, not Billie. Then Billie’s mother took the stage, wearing a sweatshirt with Finneas’ face on it.

The singer also talked about how happy she was for her upcoming 20th birthday. “It takes time and effort to accept who you really are,” Billie said. “You’ll be so happy that you did. I spent a lot of years pretending to be somebody that I’m not, basically acting.”

Billie appeared in a few holiday-themed skits throughout the show, including a “Lonely Christmas” commercial and a “Hip Hop Nativity” sketch in which she wore a feathered ’80s-style wig. She did some singing and indicated that despite her acting ambitions having “died” when she was a child, she could hold her own with the SNL team.

Billie also played two songs from her new album, Happier Than Ever, including the title track, which she sang alone before joining her band for the song’s climax. She also sang “Male Fantasy” while sitting on the floor with Finneas on guitar and dressed in a sweatshirt, shorts, and socks. 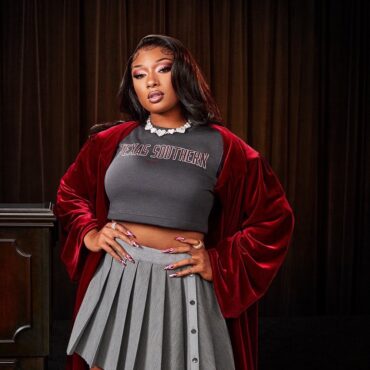 Megan Thee Stallion is officially both a savage and a scholar. The three-time Grammy Award winner, 26, received her bachelor's degree in health administration from Texas Southern University on Saturday afternoon, fulfilling a long-held ambition that has remained close to her heart despite her meteoric rise to stardom. Also Read: Olivia Rodrigo Named Time Magazine’s Entertainer of the Year "Good morning hotties !!! "It's graduation dayyyy," she tweeted, adding the […]